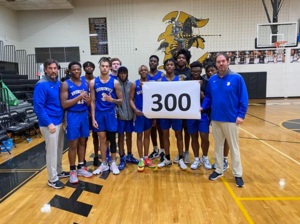 Chris Turner has become synonymous with Brunswick High boys basketball since taking over the program in 2008, and this past weekend, the head coach hit a momentous milestone in Evans.

The Pirates swept back-to-back contests over Region 2-6A rivals Lakeside Evans and Evans to improve Turner’s all-time record at BHS to 300-123. Among the 300 wins includes nine Sweet 16 appearances, four appearances in the Elite 8, three trips to the Final 4, two state championship games, and a state title.

“It means a lot to me because we’ve got hometown kids, and we have pretty much always played a pretty difficult schedule, so we’ve had to earn a lot of them,” Turner said of reaching 300 wins. “I’m real thankful for my staff, for all my players and former players who have helped us. It’s definitely not just me. It’s a collective effort of a lot of different folks, all the people who support us.

“It’s something you can’t do by yourself. You have to have a good team around you, and we do. So I’m thankful for that.”

In Turner’s first season at Brunswick, he led the program to a 19-10 record and a trip to the Sweet 16 round of the state playoffs before suffering his first and only losing season as the Pirates’ coach the following year at 8-20.

But Turner proved Brunswick had hired the right coach when the Pirates set the single-season wins record for the boys with a 25-4 campaign in his third season, proceeded the first of five region championships the next year.

Brunswick would go on to reset the wins record at 29 during a 2014-15 season that saw the program win its first state championship.

However, if you were to ask Turner, the accomplishment he’s most proud of from his staff is sending more than 20 players off to play college ball.

“The most important thing for me is for them to be successful and be ready to go out into the real world, “ Turner said. “That to me, especially a kid getting a chance to go play ball at school and get his education, is real gratifying for me.”

Assistant coaches for both the county’s schools are former players under Turner — Brunswick’s Ty Jackson and Marquise Jones at Glynn Academy — and there will soon be three former Pirates basketball players on an NFL roster in Darius Slay, Tracy Walker and Warren McClendon.

Still, there are no favorites to Turner, who treasures his relationships with all his current and former players.

“I love all my former teams and former players the same,” Turner said. “My main goal is not just to win a game but to try to help them for after basketball.”

More often than not, Turner accomplishes both simultaneously. This season in particular has been one of the most impressive coaching displays of his career with a team made up primarily of underclassmen.

Aside from seniors Camarion Johnson and Riyon Rankin, none of the Pirates’ starters had logged significant varsity minutes entering the season, if any at all.

Despite the inexperience, Brunswick is 16-3 on the season, including 8-1 in a tough Region 2-6A following a pair of victories over the weekend.

Traveling to Lakeside Evans on Friday, Brunswick pulled off a come-from-behind 65-61 win in double overtime. The Pirates trailed by five in the final minute of the fourth quarter before CJ Battle drained a game-tying shot from 3 at the buzzer in regulation to give the team new life.

“That was an amazing win,” Turner said. “We were down five with about 30 seconds to go, and ended up getting a layup and hitting a shot at the buzzer to send it into overtime.

“It was a huge win. Hopefully our kids learned a lot during the game: When to take a good shot, different situations. It was good for us to go through that. It was a tough environment; Lakeside played really well, played hard and physical. It was a really good win for us.”

Fewer than 24 hours later Brunswick took the court again and handled Evans 63-51 to complete its road sweep and earn the 300th win of Turner’s illustrious career.

“This team we’ve got here, they don’t have a lot of experience as far as kids playing at this level, but we do have a lot of heart, and a lot of kids that just don’t give up,” Turner said. “They play hard, and they’re playing together. They seem to becoming closer as a team, and it’s always good to see those things come together, hopefully at the right time.”

Johnson scored 26 points and pulled down seven rebounds to help his coach to the milestone, Rankin had 16 points, 10 rebounds, five steals and a block, and Kent notched six points, 15 rebounds and two more blocks.

Winners of 11 of their last 12, Brunswick is in sole possession of second place in the region with three more games remaining against region foes, beginning with a home matchup against South Effingham at 7:30 p.m. Tuesday.

There weren’t many expectations for Brunswick entering the season, but there has just been something special about these Pirates.

“I’m real proud of my guys,” Turner said. “I’m glad they’re not quitters. They’re playing to the end, and we’ve just been real fortunate that it’s went our way in a lot of these close games.

“We hope we can have a strong finish.”