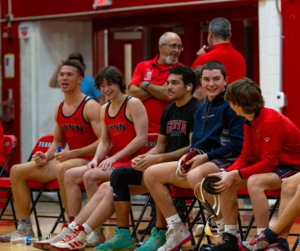 The Terrors are no strangers to a championship atmosphere.

Glynn Academy wrestlers have gotten a good look at what it takes to win at the highest level the last couple years as they watched Jackson Wakeland win back-to-back individual state championships.

But now, the whole team is here.

On Saturday, the Terrors will be one of eight teams competing for the GHSA Class 6A Boys Team Dual Wrestling Championship in Gainesville.

“It’s been a fun year,” said Glynn head coach Ryan Alfau. “It’s a pretty young group of kids, but the group has a lot of ability, so I’m not surprised we’re here to be honest with you.”

Alfau is likely one of the few.

Glynn Academy has not appeared in the team state championships since 2009, and although the program came close in a 39-27 loss against Lassiter in the final round of sectionals last year, the team graduated a number of key seniors from the squad, which along with Wakeland, includes state qualifiers Aiden Bee and Parker Sams.

Those voices aren’t gone though — just emanating from a different source.

“Jackson had a great year last year, but we had four or five seniors in the lineup who were really pushing the kids in the room, and they were pretty vocal,” Alfau said. “They lifted and excelled the program on a day-to-day basis. Jackson, fortunately he won a state title, but there was a lot of guys in that room trying to push this thing forward.”

The effort was absorbed by the younger wrestlers in the program, and they’ve gone on to pick up the torch as leaders.

Liam Bee, Phil Cuttino, Cade Morgan and Lucas Ketcham each bring back experience gained from competing in Class 6A Traditional Wrestling State Championships last year, and they have worked tirelessly to improve upon their respective campaigns.

Now in his second season as coach, Aflau has helped guide a culture change that extends past the wrestlers on the mat to the coaches, parents and support staff around the program.

“The program is really built on just finding ways to improve on a day-to-day basis,” Alfau said. “We’ve really established that in the kids and the culture of the program. The goal everyday when they walk into practice is to get better, and everyday that they compete is to compete as hard as they can that way we put ourselves in a position through competing hard with a lot of effort.

“We always try to find takeaways: We can highlight the positives then look at the things we need to fix… We don’t really have an entitlement mentality when it comes to how we compete. It’s always about getting better, finding out what our deficiencies are, working in practice to improve those areas, and then just building week to week.”

That mentality is reflected by the Terrors’ schedule. Glynn Academy has sought out the best of the best to prepare themselves for this moment, attending tournaments hosted by perennial Class 7A contender Camden County and wrestling some of the top programs in the neighboring states.

And that doesn’t include Glynn’s own Region 2-6A slate which features two of the top-ranked programs in the classification in Brunswick High and South Effingham.

While the Terrors’ wrestlers may not have sparkling individual records, they’re battle-tested.

“We’re not shying away from the competition. One of the the mottos that we talk about this year is being in the fire. The goal was to keep the kids in the fire, keep around the best teams, the best competition, and just let everything work itself out from there.”

Everything has been working out the Terrors’ way.

Despite finishing third at the region duals, Glynn Academy was confident going on the road to Dunwoody to compete in the sectional. That confidence was proven well warranted as Glynn rolled past Alexander 71-12 before thrashing host Dunwoody 72-6 in two of the most lopsided victories of the preliminaries.

“Wrestling is pretty much all about matchups, so looking at some of these other teams, we had Alexander right off the bat — they’re typically one of the strongest teams in 6A in the state of Georgia for a long time,” Alfau said. “We just didn’t meet much resistance from them. We tried to get some favorable matchups in there and really put our better kids on their better kids to try to negate some of the points, and we beat them pretty heavily.

“Then we wrestled Dunwoody, who was the Region 4 champ. But again, our region is pretty much the upper echelon of 6A, so we didn’t really have too much of a hard time with them. There were some good matchups in there, but our kids just wrestled tough, and I think they came into that sectional knowing that we’ve been wrestling tough competition all year. I’ve got kids in my lineup who have 10 losses, but they are all quality losses, and I wouldn’t be surprised if those kids place top 6 in state with that many losses.”

Glynn Academy will look to make program history and bring the first team dual championship back to Glynn County when it opens its run against Woodward Academy.