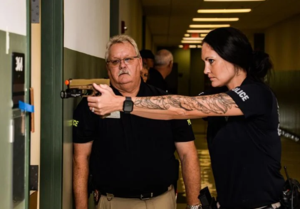 Her gun drawn, Jennifer Seawell stepped lightly across the hallway Friday afternoon as she approached a classroom’s open door.

Combining elements of stealth with assertive tactics, the Glynn County Schools Police officer quickly scanned the entire room’s interior for threats, all without revealing her position to any potential assailant inside.

Then Ellis instructed Seawell to do it again.

“This is not a one and done thing,” Ellis told his officers during Friday’s training session. “You’re going to need to practice it over and over again.”

Friday’s “active shooter” training at Golden Isles Career Academy on Glynco Parkway wrapped up a weeklong session for the county schools police department’s 24 officers. Throughout the week, officers focused on everything from child psychology and mental health to search and seizure and interactions with parents. Officers also went through firearms training and qualifications on a shooting range.

They will return Monday for a refresher course in advance of Tuesday’s first day of the 2022-23 school year.

The various “active shooter” drills Friday focused on actions needed should the unspeakable occur on a local school campus. The tactics and techniques conveyed to the officers were taken from top law enforcement and military training textbooks ranging from nearby Federal Law Enforcement Training Center to the vaunted Israeli military police, Ellis said.

Without naming it, Ellis referenced the apparent layers of indecision among law enforcement during the recent tragedy at an elementary school in Uvalde, Texas. That is why officers spent hours Friday going through the steps of approaching a classroom when danger is real and present and time is at a premium.

A former Brunswick police officer, this is Seawell’s first year as a county schools officer. She understands how vital repetitive training is to producing an effective outcome should a real world scenario unfold.

“Muscle memory,” she called in.

“This is extremely important,” Seawell said. “We have to be prepared at all times. This is absolutely relatable to the job we are expected to do.”

Ellis was recently appointed to the state’s School Safety Advisory Committee under the Georgia Emergency Management Agency. Training and preparation are hardly aspects of law enforcement that he deems too time-consuming or arduous.

When an officer performed that same drill outside the classroom with otherwise admirable form and precision, Ellis cautioned him to avoid concentrating too hard on the footwork.

“You did a great job, but don’t worry about your feet,” he said. “The problem is not on the floor in front of you, it’s in the room.

“This is a technical assault of that room,” Ellis added. “You are being sneaky about it. But this is an assault, to put down that threat.”

He looked around the hallway, making sure all of the officers understood. They nodded. He nodded. Then Ellis instructed the officer to do the drill again. He wants the officers to act instinctively should a parent’s worst nightmare occur on their watch.

“I want everybody prepared, even though the likelihood of this happening is very slim,” Ellis said. “But we want them to be trained for the eventuality so that there is no hesitation about how our officers respond.”