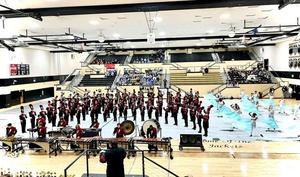 Glynn Academy’s marching band demonstrated at their latest competition that hard work and perseverance will pay off.

The band traveled to the Deep South Classic Marching Competition in November and brought home the Grand Champion title, along with several other first-place awards

The band performed a show they’ve been working on since the 2020-21 school year, but a last-minute change of performance space because of bad weather put their months of work to the test.

“The weather was awful,” said Chris Duke, director of bands at Glynn Academy. “It was cold, rainy, everywhere. They had to alter the competition to account for the weather, but they still held it. We performed the music, and the guard still performed, but it was in the gymnasium so all the bands had to adjust and adapt to the new surroundings … But the kids adapted very, very well.”

The students performed their show “Transcend,” which was originally created for the previous school year but never got its deserved moment in the spotlight because of COVID-19 limitations.

“This year, we put a lot of time into focusing on this show and making this was our big one,” said Jay Boyden, a senior and drum major in the band.

Adapting a performance meant for outdoors to an indoor space requires a variety of adjustments, said Evan Jimmerson, senior and drum major.

“First we made sure everyone was equidistant from each other, made sure all the sound is getting through everyone’s ears because a gym reverberates,” he said.

The band received notice at the last minute that they would be performing indoors because of poor weather conditions.

“It’s not optimal,” Duke said. “It’s not what you want to do, because you want to get out there and perform our show … They worked so hard getting that show where it needed to be.”

The band members made the best out of a challenging situation, he said, and put on a tremendous show that impressed the judges.

“It would have been these seniors' freshman year, as a matter of fact,” he said.

These kinds of accomplishments require consistent hard work, and teaching that kind of work ethic is a primary objective of the marching band program, Duke said.

And a trophy doesn’t equal success, he said. Instead, he teaches the students to be proud of the work they put in.

“In the end, that consistency and that work ethic will result in the highest of accomplishments, and we were blessed this year to have that opportunity,” Duke said. “We’re proud to bring that back to our city and our county.”