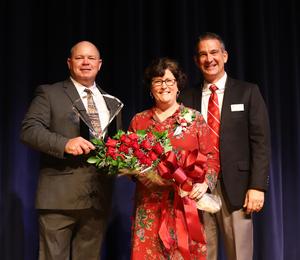 Paige Browning, an English teacher at Glynn Academy, was named the 2021 Teacher of the Year for Glynn County during a ceremony held Wednesday evening at Brunswick High.

Glynn County’s newest Teacher of the Year paid homage Wednesday night to the woman who sat in her seat decades ago.

“I was influenced by a woman named Mary Murphy who was...my English teacher at Glynn Academy many, many years ago,” said Paige Browning after being named 2021 Teacher of the Year during a ceremony at Brunswick High School. “And I walked into college knowing that’s what I wanted to be when I grew up.”

Browning was celebrated along with numerous other educators during the ceremony. Teachers of the year representing each local public school in the county, as well as Brunswick Christian Academy, College of Coastal Georgia, Heritage Christian Academy, St. Simons Christian School and St. Francis Xavier Catholic School, were honored.

Principals from each school stepped up to the podium to talk about their school’s chosen teacher, each of whom was selected by their peers to represent the school.

Teaching is a science, an art and a craft, said Scott Spence, superintendent of Glynn County Schools.

“Each of you here tonight are not here only because of teacher evaluations and test scores, which I’m sure are fine,” he said. “… You’re here tonight because your colleagues believe that you have honed your craft to such a point that they chose you to represent them as their Teacher of the Year. I can’t imagine a higher honor.”

More than 50 businesses and groups sponsored this year’s Teacher of the Year ceremony.

“It’s not just the impact that she has on the students, which is tremendous,” he said. “Have you ever been around a teacher who makes you want to be a teacher? I think we all have that. She’s that teacher.”

Ninety-minute classes go by in a snap when an engaging teacher like Browning is at the helm, he said.

“There’s not a child that leaves her classes that is not prepared for the next level if that’s what they choose to do,” he said. “She has such an impact.”

Browning teaches AP courses and chairs the English department at Glynn Academy. She’s worked as an educator for nearly 30 years.

She said she’s honored and humbled to be named 2021 Teacher of the Year.

“I’m a product of the Glynn County School System,” she said. “I love children. I love my job. I know we all do. Those of us who are in this room are here for a reason.”