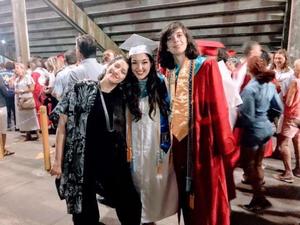 2021 Glynn Academy graduate Levi Norman will begin studying this month at the Massachusetts Institute of Technology on a full scholarship. Click the link to read more.

Levi Norman had an unexpected audience the day he received some life-changing news.

Norman, who graduated this May from Glynn Academy, was meeting new coworkers during his first shift at the St. Simons bakery Dulce Dough when the email came through his inbox.

“(My boss) turned to me and asked, ‘Where are you going to college?’ when introducing me to my new coworkers,” Norman recalled. “And I was like, ‘Uh I’m not exactly certain. I’m waiting to find out where I’ve been accepted. In fact, I might have an email.’”

Glancing at his cellphone, he saw that very email. It was an acceptance to the Massachusetts Institute of Technology (MIT), one of the best colleges in the country, and Norman will begin this fall on a full-ride scholarship.

After sharing this moment of achievement with his new acquaintances, Norman stepped aside to call his mom and share the big news.

Norman will attend MIT on a full scholarship covered by grant opportunities offered in part through the QuestBridge program, a national nonprofit based in Palo Alto, Calif., that connects students from low-income backgrounds with higher education opportunities.

Norman has long been interested in attending a technology school like MIT but had worried the high price tag would be a barrier.

“I’ve always been a very academic student so I was very into researching which schools I wanted to go to, which ones are the best ones,” he said. “… MIT was one of the best, so that was one that I wanted to apply to, and it worked out perfectly that they partnered with the QuestBridge program.”

Norman will begin his first semester this week in Cambridge, Mass.

MIT takes a different approach to the freshman year experience than most higher education institutions. Freshmen do not declare a major at first and are graded on a pass-fail system during their first semester.

“That first semester gives them the room to do that with no penalty to their GPA or transcript,” Norman said.

He hopes to study computer science and physics and someday build, design and program computers.

He also took every physics class available to him, both at GA and online, and went beyond that education to explore resources on YouTube and in scientific articles.

But he always knew there was more knowledge to gain.

“MIT is going to be the opportunity to really learn the things that I’ve always been interested in and wanted to know,” Norman said. “That’s the main reason I want to go to MIT.”

He gave credit to his teachers at Glynn Academy for preparing him for this moment when he can take the next big step in his academic journey.

“There are some standout, spectacular teachers at Glynn Academy that really allow students to not just learn what’s on the page but also to ask a question and apply it in a different way and to have a conversation,” Norman said. “I think that’s really what learning is about.”