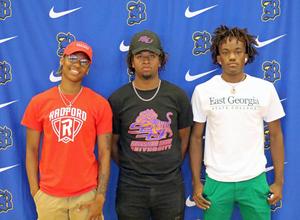 Three key contributors to the Brunswick High basketball teams were recognized Friday in the school’s gymnasium during a ceremony in which each announced their plan to continue their respective athletic careers.

Each member of the trio had their own remarkable journey as Pirates. For Brown, that included a four-year career with the Brunswick girls basketball team that saw the athletic slasher garner four all-region selections.

With Brown in the lineup, the Pirates qualified for the Class 6A playoffs each of the past four seasons, and they advanced to the Sweet 16 in three of those campaigns.

Brown will trade in her blue and gold for the previously antagonistic red and white at Radford, following a recruitment process that included the Highlanders coaching staff laying out a blueprint for her development and making her feel a part of the family.

“I can’t even say too much about that,” Brown said of her new colors. “But it’s something new, so I’m very excited overall.

“I bleed blue and gold always — once a Pirate, always a Pirate — but in regards to the next level, I’m very excited, very ecstatic. I can’t wait to see what’s in store for me at the next level.”

Brown accumulated more than 1,000 points, 800 rebounds and 200 blocks during her time at Brunswick, and she excelled in the classroom with a GPA over 4.0.

It’s safe to say, the Pirates won’t forget about Brown’s anytime soon, and the feeling is mutual.

“It’s a humbling experience,” Brown said if signing with a Division I program. “You never forget where you come from, and I’ll never forget it — the ups and downs, the good and the bad, the highs and the lows that came here. But overall, it just made me prepared for the next level.

Bean will also be joining a DI program after accepting an offer to become a preferred walk-on for the Savannah State football team.

A two-sport standout who earned all-region honors on the hardwood as well as the gridiron, Bean initially committed to Concord on February’s signing day, but his uncle, a Savannah State alumnus, encouraged his nephew to look into his alma matter further.

Liking what he saw, Bean contacted a member of the Tigers’ coaching staff, who welcomed the tight end that caught 44 passes for 651 yards yards this past season to walk onto the team as a receiver, where he’ll be reunited with his two-sport teammate Tyrease Jones.

Four years ago, Towns never would have expected the document he’d sign as a senior was to continue his basketball career.

Towns was cut from the team his freshman year, and went through a number of disappointing times on the court, but through his determination and family’s support, he persevered.

“I wouldn’t expect me signing today,” Towns said. “My intentions were to just go to the military, and just provide for my family.

“But for me to sign a basketball scholarship, it made me proud, and it made them proud.”

Towns’ constant strive for improvement will serve him well at the next level, where he’ll play under Travis Garrett, a head coach with over 20 years of experience.

“Coach Garrett he he’s a great coach and I’ve heard a lot about him,” Towns said. “When I went up there on a visit, I felt comfortable. I liked the dorm, I liked the campus.

“I’m just ready to get up there and play; show them what south Georgia basketball is about.”