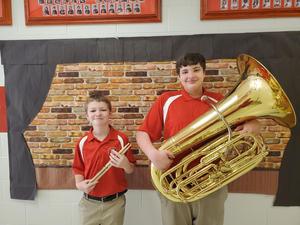 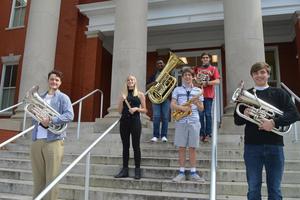 Six Glynn Academy students were named among the best high school band musicians in Georgia and will be members of this year’s All-State Band.

It’s rare to see such a large number of students from one district be recognized, said Chris Duke, band director at Glynn Academy.

“To be named amongst the best, that’s a pretty big deal,” he said.

Members of the All-State Band are playing among the handful of others who match their skill level across the state.

“For instance, Marquavius made it on tuba,” Duke said. “There’s only six tuba (players) per band.”

The students had to audition virtually this year because of COVID-19 restrictions. GA’s band set up an audition space in the band room to record their submissions.

The experience was in some ways more challenging than an in-person audition, Blumer said.

Knowing other students across the state could re-record their auditions and minimize any mistakes increased the pressure, Walton said.

“There’s more pressure to be perfect because you know everyone is going to take that second chance over and over to try to make it as good,” she said.

Rather than attend an in-person program with everyone named to this year’s All-State Band, the students will instead be part of a virtual program that will be more personalized, Duke said.

“They’ll have a little more of a direct impact for each kid, as opposed to the group performance, which we miss,” he said. “It will be certainly better than nothing at all.”

The students named to this year’s All-State Band have put thousands of hours into practice and private lessons.

“The band works hard, and we have enjoyed setting them up with a culture for success,” Duke said. “But they take it upon themselves to push themselves over that edge.”

To earn recognition for this hard work is rewarding, the students said, especially in a year with less opportunities to perform.

“I feel like I finally achieved some sort of recognition and the playing skills,” Torbert said. “I know I’m a good musician, and I know we’re all good musicians. But once you get to that place, it really feels like you’ve been awarded something that you’ve been striving for for most of your high school career.”