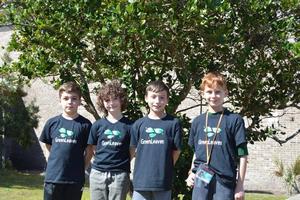 A group of fourth-graders at Satilla Marsh Elementary were outside during recess one recent afternoon when they noticed a barren space on campus. The empty field was clearly missing something, they thought. The space needed trees.

That idea soon sparked a grander vision, and the four boys wanted to do more than plant trees. They wished to make their school more beautiful and more environmentally friendly.

“We were having a meeting with Ms. Sapp because we wanted to start the fundraiser, and she told us we needed to think of a name,” said Boston Riley, one of the founding members. “So we started thinking of names. Our first name was ‘tree club,’ … then eventually we thought we shouldn’t just do trees — we could do all the nature stuff.”

Once the name was chosen and t-shirts purchased, their next order of business was to form a partnership with Forest Nation, an organization devoted to global reforestation.

The Green Leaves Club plans to sponsor a fundraiser at the school, through which they will sell tree kits and offer an opportunity to make a donation to Forest Nation, which will in turn plant the same number of trees purchased locally in a forest in Tanzania.

“Buy one, plant one,” Sapp said. “So every kit that is sold, they plant a tree, and every tree registered and named, they plant a tree so the possibilities are endless for us to help reforestation around the world and right here in our backyard.”

Each tree is tracked so its growth can be seen online. Those who purchase the trees and plant them locally are encouraged to post pictures online too.

“We’re planting it in a little field behind the school, and we’ll have a website,” said Griffin Goldstone, one of the founding members of the Green Leaves. “And satellites in space will take pictures of the trees.”

Sapp said this will be a Title I initiative, and she hopes the community will support the fundraiser. The students also selected a local nonprofit, Glynn Environmental Coalition, to which they will donate 25 percent of the proceeds they raise. The remainder of money raised will support the school.

“We were thinking how many trees get chopped down in this community,” Riley said. “So we were thinking it couldn’t just be a school thing. We could just make it the whole community.”

Rachael Thompson, executive director of Glynn Environmental Coalition, said her organization is excited to work with the students.

“We would love for the community to turn out in support of these students,” Thompson said. “Youth are our future, and the fact that these young men have come out and decided to actually take an action to do something to better our environment and support our organization, that’s kind of just a plus.”

She said she hopes to see the community enthusiastically support the students’ budding passion for environmental justice.

“They’re super enthusiastic, and I think if our community matches that enthusiasm they’ll be more likely to do something like this again in the future,” Thompson said.

She also commended the staff at Satilla Marsh Elementary who supported the students’ vision for the Green Leaves Club.

“We’re just so grateful that the teachers were excited, and they’ve become invested in seeing the student project come to fruition,” Thompson said. “I just want to give a shout-out to the teachers because you know they deserve the credit along with the students.”

The fundraiser will begin later this school year. In the meantime, the club will be using educational resources provided by Forest Nation to learn more about the importance of reforestation around the planet, which promotes job creation, better food production and more breathable air.

Satilla Marsh also plans to host a family event and campus clean-up during the week of Earth Day, which is April 22.

“They want to make sure it happens every year so even when these guys head off to middle school they’re going to leave their eco-legacy,” Roozen said.

To support the fundraiser, visit forestnation.com/net/forests/satilla-marsh-elementary.