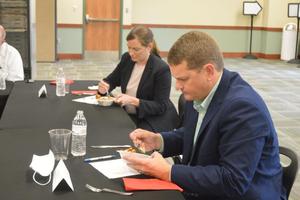 The creativity and cooking prowess of culinary arts students at the Golden Isles College and Career Academy was on display Tuesday for a friendly competition, judged by five community members.

The fried egg roll with a special-made sauce came in first place, but the ice cream enhanced with habanero peppers scored a close second.

The creativity and cooking prowess of culinary arts students at the Golden Isles College and Career Academy was on display Tuesday for a friendly competition, judged by five community members.

The students have for the past two weeks been preparing for an upcoming virtual FCCLA competition, slated for Oct. 13-14. They were instructed to find a recipe with peanuts and make the dish with no changes along with a second version of the dish that changed several components of the recipe.

The school competition hosted Tuesday aimed to give them some extra practice in a higher-stakes setting.

Sitting more than six feet apart in GICCA’s conference room, the judges tasted the dishes from the original recipe and the dishes made with the students’ changes.

“The kids are watching from my classroom, anxiously awaiting your opinion of their food that they have worked really, really hard on,” said Chef Haley Meredith, culinary arts instructor at GICCA, as she handed out the dishes, which included the spring roll and ice cream recipes, as well as pasta and a pancake dish.

The judges tried each dish, in its original and changed version, and carefully considered the taste and presentation before writing down their scores.

When each plate had been tried and the final points were submitted, the students were able to talk with the judges via a virtual livestream. They first asked about each judge’s favorite dish, then explained some of their thinking behind the recipe changes while Meredith tallied the scores.

When the results were in, the egg roll came out on top. Its creators could be heard cheering and seen celebrating on the laptop screen.

Taylah Roberts, a 10th-grade student and part of the two-person team that made the spring rolls, said the competition allowed her to practice her culinary skills and learn how to fix mistakes quickly. She also had the chance to get creative with the recipe.

“You wanted to incorporate more peanuts in any way that you can, so one thing that I did instead of baking it I fried it and I used peanut oil,” she said.

The students have already sent in video submissions to the FCCLA competition, and 30 entries are going to picked at random. The winners will be announced from among those chosen 30.

Before the students and judges signed off, GICCA’s CEO Lori Peacock asked about the inspiration behind the pepper-infused ice cream.

“I’m really interested in how they came up with putting habanero in ice cream,” Peacock said.

From the laptop, a student’s voice responded. “I wanted to make it spicy.”