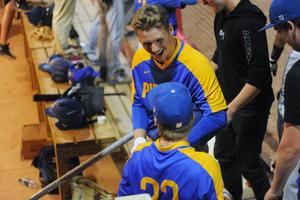 With all of the spring sports canceled due to the coronavirus pandemic, the Glynn County Schools Athletic Department came up with an idea to honor these athletes.

Since none of these athletes got to finish out their final seasons in Pirate or Terror colors, Glynn County Schools athletic director Steve Waters organized an event last Monday with most of the spring coaches to put together a video to honor the seniors.

“Over the last month, you’ve seen different schools doing things to honor their seniors, and we just wanted to put our own stamp on honoring our seniors here,” Waters said. “All of our coaches have been 100 percent behind it.”

Waters gathered the coaches and filmed them thanking their seniors at various stadiums in the community. Waters worked with iMint Media, the same group that does the live videos on the scoreboard at the football games, who will publish a video on the GCS Athletics website once it’s ready for viewing. The expected release date is Tuesday.

As a way to help the Glynn County Athletic Department, The Brunswick News will honor each sports' senior groups twice a week to make sure the community can hear all about these athletes.

Our first senior group is the Brunswick High baseball team who has eight seniors graduating.

Each of these guys played vital roles for the Pirates throughout their entire career at Brunswick High. Coach Brian Crawford announced earlier this season that it would be his final one after his wife accepted a new job that will take his family to the Los Angeles area late next month.

He said that coming back to Bud Couch Field was bittersweet for him. However, he wanted to honor the seniors and thought this was a great way to do that.

“I've coached for 13 years, and now I'm taking a step back from that on this move,” Crawford said. “It’s emotional — I don't know, it's just coming out here today was it was odd.”

He said that he enjoyed this senior group as he got to see them develop in the beginning and see them grow into the players they are now.

“This senior group is just like any other senior group,” Crawford said. “I wouldn't put them on a pedestal of any sort, but at the same time, it's a special group. There are a lot of special kids or special players, and they've done a lot of special things in the program over the years. So, we're just thankful for the other word, they have put him to the program.”

Goff led this senior group through the first 15 games as he appeared in seven games and averaged a .368 batting and slugging percentage. He collected seven hits, six RBIs, scored four runs, and tallied three stolen bases on the season.

Bryson Wilson was the second leading senior on the team as he had a .250 batting average through his seven-game appearances. He scored three runs, collected four hits and four RBIs.

Richburg was a massive piece of Brunswick’s success. He might have only had a .211 batting average through seven appearances, but he led the team with a .421 slugging percentage. This season, he hit the team’s only home run and collect two runs, four hits, and five RBIs.

In the field, he holds a 1.000 fielding percentage as he tallied 10/10 on total chances and putouts.

Richburg was also used on the mound by the Pirates. He holds a 4.20 ERA after pitching 8.1 innings and giving up two hits, six runs, five earned, seven walks, and seven strikeouts.

Goff and Richburg will get to keep playing together as both of them signed with South Georgia State College last month before schools got closed.

Ethan Herrin tallied two stolen bases this season and held a .938 fielding percentage as he went 15/16 on total chances and putouts.

Crawford said that of all the memories he has with this group, his favorite had to be last season when the Pirates swept Glynn Academy for the city championship.

He said that while these seniors won’t have their usual banquet, he hopes now that everything is beginning to open back up, they will be able to eat somewhere and honor these eight young men somehow.