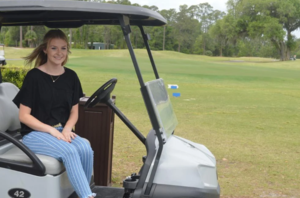 Brynn Hebner didn’t waste a moment of her experience working at the Brunswick Country Club this past year.

She got to know the club’s members and met interesting visitors who came through for events. She gained experience and practiced her soft skills.

Hebner applied and received the Shirley and Billy Weir Scholarship, a full ride opportunity that covers the cost of tuition, housing, food, books and more. She was eligible for the scholarship because she worked for the Brunswick Country Club, an opportunity made possible through Glynn County Schools’ work based learning program.

Hebner also applied earlier in the school year for a $1,000 scholarship offered by the Golden Isles Retired Educators Association, which she learned in February she’d received.

“That in itself was a blessing,” said Hebner, a senior at Brunswick High. “I was not expecting that.”

She began working early in the school year on the application process for the Shirley and Billy Weir Scholarship, which required winners to submit an essay, recommendations and an impressive résumé.

After being named among six finalists, Hebner traveled to Perry for an interview. Later that day, she got the call. She won the scholarship.

She opted then to ask if the Golden Isles Retired Educators Association would be willing to award their scholarship to the runner-up.

The scholarship honors two of the Georgia golf community’s most beloved people. Billy and Shirley Weir were long-time sponsors of events in the Georgia PGA.

The scholarship is the reason she’ll be attending Georgia Southern for college.

“Without it I would be here at Coastal just because the amount of debt coming out of college is not worth it, especially as an elementary education major,” Heber said. “Being able to go debt free is going to be amazing.”

She has worked at the Brunswick Country Club since July 2021.

“The people who come here come here pretty much every day so you get to know them pretty well and they’re just great people,” Hebner said. “They told me about this scholarship before I applied.”

Hebner has participated in the work-based learning program since her junior year. She’s also a student-teacher at Burroughs-Molette, a varsity and competitive cheerleader and a member of Brunswick High’s Future Business Leaders of America chapter, as well as the National Honor Society.

“Brynn came in confident, motivated,” she said. “She had goals, was always open to feedback, always wanting to make a difference.”

Brunswick Country Club General Manager Dan Hogan said he and others at the club are excited for Hebner. They’ve seen her great work over the past year, he said.

“She gets along with everybody,” he said. “She does what she needs to do. She’s personable. The members love her.”

To qualify for the work-based learning program, students must be in 11th or 12th grade, on track for graduation, 16 or older, have good attendance and discipline record, receive recommendations from teachers, have reliable transportation and CTAE credits.

“It looks really good on a high school résumé too, to show that the students are well rounded and that they can juggle the academics,” Rhodes said. “They can juggle the rigor, and they can experience the real world. That helps prepare them also for college.”