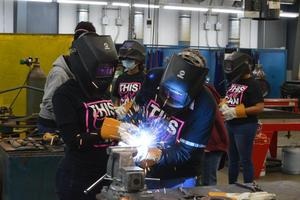 The first "This Girl Can" workshop recently hosted at the Golden Isles College & Career Academy introduced eighth- and ninth-grade girls to careers in manufacturing and offered hands-on experience working in the school's labs.

In eighth grade, Elizabeth Bittson was asked to pick a career for a class project. She chose civil engineer.

Bittson wasn’t far off the mark, as she eventually pursued a career in aerospace engineering, a job field that like many STEM industries has a noticeable gender disparity among employees.

Bittson shared last week some personal insights and stories about her experience as an engineer as part of a panel of women who work today for Gulfstream Aerospace.

The panel discussion took place on the final night of the inaugural “This Girl Can” workshop hosted by the Golden Isles College and Career Academy. The program aims to introduce eighth- and ninth-grade girls to nontraditional careers for women.

The three-night workshop invited girls and a “significant adult female,” like a mother, other family member or mentor, to participate together and learn about the manufacturing industry. They had the chance to also get hands-on experience in the career academy’s welding and machining labs, where they used the equipment to make metal wind chimes.

The first night of the workshop, participants and instructors focused on safety and began learning how to use the welding tools. It didn’t take long for the girls to gain confidence in using the equipment.

Saniya Luckey, an eighth-grade Glynn Middle School student, pulled a welding helmet over her face and held the torch carefully to the metal. Sparks flew as she worked, and those watching averted their gaze to avoid potential eye damage.

Luckey signed up for the workshop with her mother, Monique, because she had an interest in getting hands-on experience doing something she’d only seen before in videos.

“She’s really good at it,” Monique added. “Everybody’s giving her raves about the work that she’s doing.”

During the panel, Vanessa Wagner, director of business development and strategic programs for the Golden Isles Development Authority, one of the workshop’s partnering sponsors, served as moderator. Beforehand she thanked the women in attendance for taking an interest in the program.

“Anytime that you are trying something new, stepping outside of your comfort zone and taking that initiative to explore an industry, a hobby, a skill that wasn’t part of your wheelhouse previously, that’s a big deal,” Wagner said. “You should all be really proud of yourselves and of that. I hope this helps you figure out what you like, what you don’t like.”

The panel included engineers Bittson, Preeti Menon and Amy Bowden. Wagner asked them to describe their jobs and the culture at Gulfstream.

“Basically, if something goes wrong while they’re building the aircraft, I go out and I evaluate it,” Bowden said.

The panelists mentioned that often they’re the only women or one of just a few in a room or at a meeting. Wagner asked if they had advice on how to best handle that.

The women encouraged the girls in the audience to remember that they’re deserving of these positions and not to let intimidation or lack of representation keep them from pursuing their interests and passions.

“Don’t let anyone tell you you cannot do it because you can,” Bowden said. “You’re smart enough. If you love math and science, then you should study it. And just because you might be one of only five females in the class, don’t let that deter you because you are smart enough to be there.”

Thinking back to her eighth grade class project, Bittson also offered some advice — the kind that she’d give to her younger self as well as the girls sitting in front of her.

“My biggest piece of advice would be to be confident,” she said. “Don’t be afraid to get out of your comfort zone. I wish I had gotten out of my comfort zone more often. Also just be your own champion, right? … You have to really be confident and be yourself.”