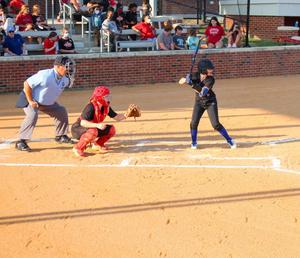 Glynn Academy’s softball team took Game 1 of the city championship 5-4 against Brunswick High on Tuesday evening as both teams showed grit and tenacity.

The Terrors won in style with a walk-off single by Katie Wagner. Glynn had to fight hard for the win on Tuesday night after Brunswick took a swift 3-0 after the top of the second. Wagner got the party started for Glynn with an inside-the-park homer to make it 3-1.

The two teams are evenly matched with talented pitchers on the mound and a slew of players who can make things happen with their bats.

Mallory Merrill got the the win on the mound for the Terrors. She allowed four runs on six hits, striking out five batters and walking six.

As for the Pirates, Erica Bentley led the way tossing all seven innings. She gave up five runs on 12 hits and struck out three batters.

Glynn Academy improves to 4-5 on the season and 3-1 in the Region 2-6A, just behind Effingham County, who is 3-0. It took a lot of work for the Terrors to get the win over the Pirates, but coach Dawn Ketcham said her girls refused to give up.

“What’s more important to me is not the fact that it was a rival game, but that was a region game — which puts us at 3-1 in the region. That is what I’m the proudest of.”

Neither team refused to give up on Tuesday. Brunswick got the quick start and showed their grit right away on both sides of the ball.

Brunswick coach Nicole Bailey said she stresses tenacity and grit all the time to her players, and it showed against the Terrors.

“It’s something that I stress daily,” Bailey said. “I’m hard on them every single day like there’s no off day, there’s no rest, there’s no relaxation, it’s a grind every day, and I think it shows in games like this.”

Currently, the Pirates are 1-7 overall. However, Bailey said it doesn’t reflect her team. She was proud of her girls and the way they played against Glynn.

“I think they did a really good job. It’s always a great game when we play them,” Bailey said. “Things are coming together for us, and I want it on the record that this team doesn’t need to be overlooked. Our record might not show what I want to show, but these girls are working hard. They’re doing a great job of improving every day. And It’s going to come together.”

Brunswick scored again at the top of the third to make it 4-1, but Glynn responded, scoring off a Pirate error.

Glynn got stronger as the game went on, while Brunswick had some costly errors in the field. The Pirates are a young group and still growing as a team, so mistakes happen. With seven freshmen and at least four of them playing at a time, growth will be a huge factor for Brunswick this season.

Bailey said, moving forward, she wants her girls to stay constant throughout games.

“I think tonight, we got a little comfortable,” Bailey said. “We stayed up, but we got comfortable with what we had. And so I think for us, it is being able to be on the gas pedal constantly.”

Both teams have suffered from injuries earlier this season but have their core groups back as region play gets going.

“We started with two injured people — one was the pitcher tonight, and one was the catcher tonight,” Ketcham said. “So we came in with an injured foot that we thought might have been broken and a concussion. Now that we have our core back, it does a lot for knowing who’s doing what, who’s playing what, and we get a good feel for what’s going on.”

Both teams had sluggish starts to the year, but as region play continues, both groups are showing a lot of growth on the field.

Up next for the Pirates will be a region game against South Effingham today at 6 p.m. as Brunswick looks for their first region win.

The Terrors host Bradwell Institute today as Glynn looks to take over the No. 1 spot in the region standings.